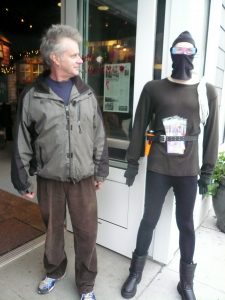 I was born in Schenectady, NY. My father decided he did not like shoveling snow, so he moved the family to the San Fernando Valley. There, I grew up with the California baby boomers listening to the Beatles, the Who, and CSN. I also developed a fondness for comedy and oddball music, like Allan Sherman and Tom Lehrer.
Although I played violin in orchestra in school, I really didn’t get into it until I learned guitar. My father was a Dixieland banjo player and he attributed my musical talent to the fact he used to practice in my room when I was a baby, but I feel this was the cause of my present day aversion to Dixieland. I’ve always been a good mimic, so I stole styles from everyone. Along with having to record, I learned the bass, which is probably my best instrument to date. I picked up other instruments along the way like dulcimer, ukulele, and piano. My first record, The Voyeur wound up being #39 of Dr Demento’s top 40 for 1977. After that came The Flasher. Along the way in my musical education,I joined Pecurka, an ethnic folk dance band, and produced their second album. My brain being like a sponge back then, I soaked up the rhythms and harmonies from playing the music. Other milestones include “Banjo Unique” for my Dad’s old teacher, where I recorded, produced and played backup. I got to go to Hawaii because I won a radio contest (KLOS) by writing and submitting a song that won a free trip.

I married Mari Aranoff, who was, and is an excellent flutist and a pretty good piano player. In our union, she blossomed as a songwriter, and we became a comedy duo, a flute and guitar act, a recording tandem. We did many recordings for ourselves and of other performers. Since then, I produced an album for Doris Williams of Celtic music, and many demos for friends. 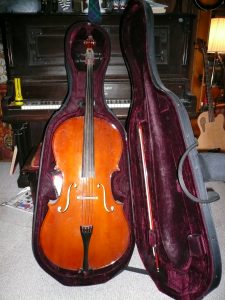 I have a book of my poems out now through a partnership with artist/editor Tina Glasner. Also I should mention that classical music has been a big part of my writing life, and I particularly like this Guitar Concerto, and This Flute Sonata. Taking tally I have to my name over 400 songs, 300 poems, 1150 parodies many which are published at Am I Right dot com

I now live in the Great Northwet, and much happier to be here.